Lake Manyara National park is one of the popular Africa safari destinations and one of the outstanding Tanzania safari wildlife parks situated 126 km (78 mi) south west of Arusha. Lake Manyara National Park consists of 330km² of forest, arid land and a soda lake and during the wet season it covers as much as 200km² of land which is also nearly nonexistent during the dry season. The majority of this Tanzania safari destination is a narrow strip running between the Gregory Rift wall to the west and Lake Manyara an alkaline or Soda lake in the East. Lake Manyara National park was established in 1960 and the park’s centerpiece is Lake Manyara with a fluctuating body of alkaline water set within a shallow swamp at the base of the northern Rift valley that floor southwest of Arusha.

A scattering of extinct volcanoes rise in splendid isolation from the open plains of the Maasai steppes in the Southeast and the lake is hemmed in by the 600m high golden brown rift escarpment alluded to its name “emanyara” being the spiky protective hedge grown around a Maasai boma in the west. The Manyara’s setting dramatically was once extolled by Ernest Hemingway as “the most luxuriant place in the whole East African Rift”. However today the park is frequently bypassed by Tanzania safaris goers in their quest to reach the world’s renowned Ngorongoro Crater National Park and Serengeti National Park. The fact is that those who choose to visit Lake Manyara National Park when on a safari to Tanzania are wise and will have a lot more to enjoy in Tanzania.

Lake Manyara is an alkaline lake set under a magnificent of the Great Rift Valley’s steep western escarpment a long narrow which keeps the area between the escarpment and Lake Manyara safe. The Lake Manyara expands and contracts according to the seasons within a long silver bowl of salt deposits. The lake has wide grassy flood plains within the vicinity and there also exist bands of mixed acacia woodlands and patches of captivating evergreen forests which are kept from the base of the escarpment going by perennial ground water springs. In about 3 to 4 hours, the road circuit which is limited can be covered offering the opportunities of sighting the animals that are always on the move. The Waterfalls spill over the escarpment wall and fill rivers, some of which can be canoed down for a great safari adventure. In the south of the park hot springs bubble to the surface but are too hot for a dip.

The park hosts a variety of animals including a high population of elephants, Leopards, cheetahs, blue monkeys, Masai giraffe, dik-dik, hippos, impala, zebras and lions. Some of the lions in the park have developed unusual behavior of climbing trees for their afternoon snooze though they have not yet mastered the art of dragging their kill high into the branches. If you want to catch a glimpse of a lion jumping over tree branches, the a Tanzania wildlife safari to Lake Manyara is a wise option, you won’t find this other popular Tanzania safaris parks. You can encounter more of these tree climbing lions when you visit Uganda on your 2 Days Queen Elizabeth National Park Uganda wildlife safari, 3 Days Queen Elizabeth National Park safari Uganda, 4 Days Uganda wildlife safari, or  7 Days Uganda gorilla & Wildlife safari. 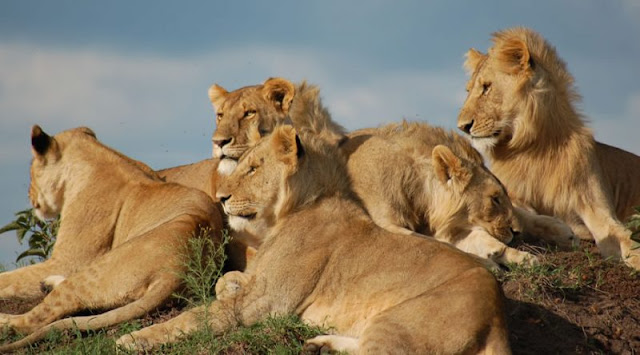 About the Bird species in Lake Manyara National Park

Lake Manyara National park is a habitat for more than 400 bird species which makes it a good spot for bird watching. Some of the bird species, avid birders can spot while birding here include; the migrant flamingos, pelicans, geese, storks, herons and cormorants. These bird species come and feed on the algae rich water and turn the crystalline edges of the soda lake a vibrant pink and numbers of the species are at their peak during the rainy season when seed eaters, insect eaters and water birds thrive and the Nomadic finch – like birds gather in breeding flocks of many thousands and fly across the park in vast twittering clouds. Having a wonderful mosaic of different habitats, Lake Manyara is famously known for the Flamingos that inhabit the lake and they inhabit the edges of the lake in flocks of thousands during the wet season. However, they are not so present during the dry season making the rainy season a much more recommendable Tanzania birding safaris time.

Game drives are a popular Tanzania tour surest and easiest way of seeing wildlife up close using 4×4 open roof safari vehicles. Lake Manyara National park offers both a day and night game drive and here the diverse ecosystems at its shining best through night game drives and the park is also known for its population of big cats, with lions being seen both during day as they sleep, and at night when they are on prowl.

Lake Manyara National park is one of the best birding safari Tanzania destination park famously known for its Flamingo bird species. The park has over 400 bird species including the 3 species that are endangered and unique to Tanzania and the migrating birds’ species from Eurasian locations and the majority of the birds do migrate from Lake Natron where they breed to lake Manyara which acts as their breeding ground and the species include the Grey crowned crane, fischer’s sparrow lark, pink lesser, the crowned plover and the flamingos.

Canoeing is on Lake Manyara offers you excellent opportunities of getting close and personal with dozens of aquatic species of birds such as the pink flamingoes that gather near the water to relax and relieve their thirst and also the park is a habitat to a number of elephants and giraffes which can be seen with a closer look as you canoe past them into the Serene waters.

The Treetop walk along Lake Manyara offers you an adventure and thrilling sky-high straight through the forest. The air walk which is about 370m high lets you to walk among the treetops and also giving you a bird’s eye view of the forest and the walkway starts right from the short board-walk leading to a series of suspension bridges with secure netting on each side which allows you to enjoy the flora and fauna.

Lake Manyara national park is surrounded by the villages of the Maasai people. A visit to these villages will expose you to the unforgettable appealing red-robbed pastoralists, their cultural way of living of the Maasai and their traditional songs and dances. These Maasai people live in their quaint circular huts made of mud and straw referred to as Bombas. Cultures are a great way to understand a destination and therefore, when you safari Tanzania, don’t miss out on understanding the Masaai people.

About the Author: Promotions Department

DO YOU NEED ANYTHING, SEARCH HERE

PLACES TO VISIT IN AFRICA