Ethopia Safaris Tours, Ethopia Safari Tour, Ethopia Safaris, Ethopia Wildlife safari trips, Ethopia Holiday Tours. We offer Customized private & group wildlife safaris in Ethopia, culture tours in Ethopia, mountain climbing & birding safaris in Ethiopia.
Ethiopia is Located in the Horn of Africa, the destination Ethiopia is one of Africa’s great safari tour destinations rich in culture & history, scenery and wildlife.
Ethiopia shares boarders with South Sudan and Sudan in the West, Eritrea in the North & Northeast and Kenya in the South and covers a geographical spread of 1,100,000km2 inhabited by 102 million people qualifying it as the most populated landlocked country in the world.
The predominant ethno linguistic groups include Oromo, Amhara, Somali and Tigrayans. Their great traditions and ancient landscape has made Ethiopia one of Africa’s best cultural tour destinations.
Ethiopia features incredible scenic sites including the Blue Nile falls, the Simien Mountains, the Sof Omar Caves – with Africa’s longest cave system among others. The Ethiopia National Parks include; Semien Mountains National Park and Awash National Park while the historic sites like cities of Axum, Lalibela, Gondar, Negash Mosque, Sof `Umer Washa and Harar Jugol combine to make the destination Ethiopia an interesting one.
Ethiopia tours offer an insight and opportunity to explore the Nine (9) World Heritage sites including Rock-Hewn Churches at Lalibela, Ruins of Aksum, Fasil Ghebbi, Harar Jugol, Gondar Region, the Fortified Historic Town, Lower Valley of the Awash, Konso Cultural Landscape, Tiya Lower Valley of the Omo, and Simien Mountains National Park. 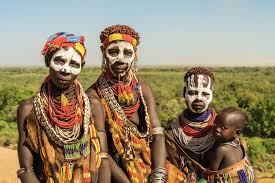 Danakil Depression is located close to the Eritrean boarder in the northern section of the Afar Triangle – a product of the geological depression that was formed due to divergence of three (3) tectonic plates in the horn of Africa. It’s one of those special features to explore while on Ethiopia tours.
Stretching to 200/50km, the Danakil Depression is 125m below sea level sharing boarders with the Ethiopian Plateau to the west, Danakil Alps to the east and beyond in the same direction is Red sea.
The Danakil depression was formed following the drifting apart of Africa and Asia. Danakil depression is the hottest place on Earth considering the average temperatures throughout the year reaching up to 50 degrees Celsius. It is listed among the lowest places on earth – the first in Africa and the second in the world after Dead Sea and hardly receives rain throughout the year. River Awash dries up in the series of Salt lakes like Lake Afrera without reaching Indian Ocean.
In the Danakil depression, the travellers on tours in Ethiopia can explore the Yellow Lake and the hydrothermal system of Dallol.

Lalibela is a great historical place featuring eleven (11) churches constructed by King Lalibela in the early 12th century. This broad church complex is made of a rock and represents a large antiquity of Ethiopia’s medieval and post-medieval civilization. It features a great architectural design as the Churches are dug in the ground. The most notable church is St. George Cathedral.
Lalibela is located in Amhara region of Ethiopia and is recorded among the holiest cities after Axum and its population is predominantly Ethiopian Orthodox Christian.  It should be noted that Ethiopia is among the earliest nations to adopt Christianity in the 1st half of the 4th Century and its Christianity history dates far back to the time of the Apostles. The Churches date far back to 17th to 13th Centuries dating far back to the times of  Zagwe king Gebre Mesqel Lalibela.
Lalibela got the inspiration from the architecture in Jerusalem where he spent time as youth and then attempted to construct New Jerusalem following the capture of Old Jerusalem by Muslims in 1187.
Portuguese explorer Pêro da Covilhã (1460–1526) was the first European to explore these churches while the Portuguese priest Francisco Álvares (1465–1540) accompanying the Portuguese Ambassador visiting Dawit II in the 1520s had this to write about these amazing churches “I weary of writing more about these buildings, because it seems to me that I shall not be believed if I write more… I swear by God, in Whose power I am, that all I have written is the truth”.

Harar is a historic Muslim dominated city constructed in the early 16th Century making it Africa’s oldest Islamic city and one of the prime Ethiopia tour attractions.
Harar stands as a holy and historic walled city marked with a range of narrow alleyways. It used to be a commercial link between Middle East and Africa. The City of Harar has a total of 99 Mosques.
In this great city, there is also a tradition of hyena feeding at night which dates far back to about 2 centuries past. The great famine struck the area and the hyena resorted to attacking people in the city. As a result, the residents resolved to serve them food and this worked creating a harmonious existence between the Hyenas and humans. This tradition has continued up-to today and the hyena man feeds theme every night. It’s an adventure that people on Ethiopia tour can explore.

Of the 1000 herds of elephants noted to be remaining in destination Ethiopia, the largest and the visible elephant herd of about 400 individuals thrive in Babile Elephant Sanctuary. The Sanctuary accessed at a short drive from the city of Harar is also a habitat to Lions, Gazelles, Cheetah, Leopard and a range of exotic birds.  The sanctuary can be explored on an exciting walking safari.

On a tour in Ethiopia, one can explore the Rift Valley which is a chain of seven lakes – each with its own different feel. The channel comprises of hot springs, wonderful lakes and a range of wild game. The amazing scenic view offers a wonderful sightseeing experience on Ethiopia tour.

The Blue Nile is a tributary of River Nile – the Africa’s longest River. The other tributary of River Nile is the White Nile. The Blue Nile emanates from Ethiopia and along its course is the Blue Nile falls – a feature similar to Niagara Falls. It ranges between 37 & 45m high comprising of four (4) streams stretch to over 400m in the rainy season.  Locally referred to as Tis Abbay literally meaning great smoke, the site presents magical sightseeing experience while on a tour in Ethiopia. It is accessible after 30km about 90 minutes’ drive from Bahir Dar and Lake Tana. The Ethiopia’s first stone bridge constructed in the 17th century on the orders of Emperor Susenyos in 1626 is just a few meters downstream.

Gondar is among the prime Ethiopia tour destination. Positioned in the Semien Gondar Zone in the Amhara region, Gondar is to the north of Lake Tana along the lesser River Angereb and to the south west of Simien Mountains. It rises to 2,133m above sea level surrounded by Gondar Zuria woreda and has served as a significant Christian kingdom for a range of years.
The city of Gondar served in the early days as the capital of Ethiopia Empire and later the Begemder Province. Gondar features a range of Royal castle remains including Fasil Ghebbi (Royal Enclosure) forming the background for naming Gondar the Camelot of Africa.  The Castles were constructed by Emperor Fasiladas and is a now a UNESCO World Heritage Site.
The city walk of Gondar is also a rewarding activity with opportunities for shopping, dining and sightseeing.

Aksum is a historical place believed to be the home of Queen of Sheba and the final resting place for the Ark of the Covenant. Aksum is among Africa’s oldest cities.  In Aksum, one can gaze over the walls of St Mary of Zion Church Complex a site where the Ark is believed to be kept before proceeding to Northern Stelea Field to explore the ancient Aksumite Obelisks. There is Mai Shum – an expanse rock hewn reservoir believed by locals to be bath of Queen of Sheba.

Simien Mountain range positioned in northern Ethiopia to the north east of Gondar in Amhara region. Simien Mountains is comprised of plateaus intercepted by valleys. The tallest peak of Simien Mountains is Ras Dejen (4,550m) followed by Mounts Biuat (4,437m) and Kidis Yared (4,453m). The Semien Mountains came into existence before the Rift valley creation about 40 – 25 million years past during the Oligocene period.  The volcano is noted to have spread to over 5000m2 resulting into a thick flow of basalt lava which was deposited on Precambrian crystalline basement.
Simien Mountains is a designated World Heritage Site by UNESCO and is popularly known as the God’s playground.    The wildlife in the Simien Mountains include; Walia ibex, Caracal and gelada.

Bahir Dar is the capital of the Amhara Regional State in Ethiopia and forms as a base for exploring Lake Tana and Blue Nile River.  Bahir Dar was in 2002 awarded the UNESCO Cities for Peace Prize credited for neutralising the rapid urbanisation challenges.
Explore the Lake and the tankwa canoe which made of woven papyrus carrying both people and animals.

The remarkable Rift Valley starts from Red Sea to Mozambique cutting through Ethiopia among other countries. The rift valley route in Ethiopia is marked by five (5) rift valley lakes including Lake Ziway.

Lake Chamo is positioned in the Southern Nations, Nationalities, and Peoples’ Region of southern Ethiopia and is one of the prime attractions explored on tours in Ethiopia. At an elevation of 1,110m, Lake Chamo is within the main Ethiopian Rift south of Lake Abaya and Arba Minch city, to the east of Guge Mountains and to the west of Amaro Mountains. Its northern section is within Nechisar National Park.  It is home to great counts of Crocodiles, Hippos, Cat fish and a range of bird species. A boat ride can be organized to the famous Crocodile Market to explore the basking crocodiles over 6m long.

Arba Minch is an Amharic word literally translated as forty springs. The Arba Minch is positioned in a place of many tiny springs bubbling up from the ridge below them. The springs are within the Nechisar National Park 3km walk from the city. The place can be explored in the Southern Ethiopia tour circuit.

Among the most profound of the Ethiopia tour attractions are the great tribes in the Omo Valley.  This area is a one stop destination for diverse authentic cultural experiences that everyone planning to visit Ethiopia should not miss.  Omo Valley has eight (8) tribes with around 200,000 people and have occupied this area for centuries past.
The most notable ones and those normally explored on cultural tours in Ethiopia include;
The Hamer People; Their traditional women have their hair braided and stained with red clay. The Hamer perform an exciting Bull jumping Ceremony to mark the transition from boyhood and the visitors on Ethiopia tour find it very rewarding.
The Konso People; these are popular for their stone wall villages, shaped grass thatched homes and pottery ornaments.
The Banna People; these are closely related to the Hamer and popularly known for their skills in Entrepreneurship and they run markets around the area.
The Mursi People; the Mursi Women traditionally put on large lip plates and have stretched ear lobes.
The Karo People; the Karo people feature fascinating body paint work.
The Daasanach People – the Daasanach people is among the smallest tribal groups in the Omo Valley and they thrive in round homes along the banks of the Omo River which can be collapsed and put together in the shortest time possible.
Other indigenous tribes in the Omo valley include the Dorze, the Surmi, the Tsemay, the Ari and the Nyangatom.

Zanzibar – the Prime Africa holiday tour destination offers a great deal of recreation experience and makes the stay beyond the ordinary. Whether on honeymoon or looking for an exclusive beach recreation, Zanzibar is by no means an ordinary destination.

Looking For Something, Search Here